I started first with classical, modern dance and japanese Butó dance.
I got to exotic dance styles across over music. Because love different kinds of music. Traveled behind it to festivals and listened to different ethnicities and world music. I saw there bellydance. I fell into love bellydance.The dance was always important part of my life. So I started to study gradually dances like arabic pop, etnic gypsies styles, American Tribal Style, Tribal Fusion,Yoga.

I have school design of lights and drawing art also.
As performer I have rich dance experiences from medieval taverns, at company events, castles, clubs, festivals, as well as Busker (street show) alound or with different kinds of bands here and abroad also. I create my own costumes. I have in Czech Republic own dance/Yoga school too.

From the nether realms of Emmen and beyond a deep rumble was slowly finding its way to the surface. A few musicians, all from different backgrounds and wind directions, decided to put their money where their mouths are. Because a deep, rumbling itch needs to be scratched urgently!

Making music like it’s never done before sounds rather pretentious and ambitious but that was exactly what they did. Papaformigas was born!

Half a century of musical experience joins heads and their melting pot contains a fresh blend of the finest herbs like Klezmer, ska, reggae and polka. Bring that to the boil and add a large amount of soul for extra flavor, and there you have it: World music from the continent of Peat, Spirits & Healthy Suspicion; sounds just about right.

With their debut EP in the pocket and with eight/nine heads packed to the brim with awesome ideas, the Formigas are more than ready for the future!

Martin Zij developed an unique taste for different music genres from all over the world, diverse but with a similar characteristic – music which gives space, excites trance and imagination but also ensures a presence in the “here and now”. His sound ranges from grounding bass & beats, tribal grooves to a more meditative and lyrical vibe. These he brings together in a funky and soul-full way touching the heart of the dancer and listener.

As might be expected of a (ceremonial) musician he is guided by the energy on the dance floor, and is not afraid of unexpected surprises and twists in his DJ sets.

One of the reasons to find his passion for deejay-ing was the discovery of Ecstatic Dance. Suddenly it became clear that all the music Martyn loves so much easily can come together in a set for this special phenomenon. At the end of 2013 Martyn became and is still one of the resident-deejays of Ecstatic Dance Amsterdam. From then on Martyn also got invited by diverse Ecstatic Dance Tribes in Netherlands and Europe. He loves to share the music, the dance and the joy with these communities and gets inspired by the different vibes of the unique happening every Ecstatic Dance is.  After a few years deejaying Martyn started to combine his skills as a producer/musician with his experience as a deejay.

He uses his studioskills to remix and rework different music from all of the world so they become “dance floor” friendly and he can include them in his deejay-sets. Next to these remixes he is also working on his own compositions and songs to spread and share his unique deep funky and heartwarming sound all over the world.

“A woman that seeks to portray and discover an inner road to a world of happiness and love. Born in a world where depression, stress, nervous breakdown, destruction, pollution of enviroment,  pollution of mind are facts, she paths her way to change her life. With the Toltec Wisdom as a guideline she explores what is truth, what are believes and lies, what is awareness and virtual reality,  wisdom and knowledge. Through playful insights she finds the way to recover her true nature, the true self and to be the artist of her own life. Dreaming your Way, shows a universal theme to liberate oneself and go beyond suffering in which many can recognize themselves.
During the theatre performance you’ll be as an audience at times a spectator and at times participating in the story.”

They originated in the streets of Rotterdam, where several street musicians went to play together. This resulted in this cheerful and swinging band called Buzzking. The delightful “Skanking Folk” invites you to dance, sing along. Together we can make the party rock…
Website: https://www.facebook.com/pg/BuzzkingMusic

The Balcony Players are an energetic, nomadic folk band that takes pride in making people happy and dance around the world! The international group includes members from the Netherlands, Belgium, Peru and New Orleans, USA, and their music combines these different cultures with a mix of traditional Gypsy, Jewish, and folk from around the world to create a unique and colorful sound that will lift you from your seat!
The Balcony Players began in May 2009, giving concerts on their balcony (thus the name)! Since then they have played at many stages and festivals around the world including Holland, Spain, Brazil, and the United States just to name a few.
In addition to touring professionally, they spend their spare time exploring the countries they visit in a more personal way- playing on the streets, couch surfing with people they meet and studying the folk music and culture of the region.

Kareem Raïhani has been called many names for the ecstatic journeys he creates world wide on festivals, gatherings, retreats and ceremonies. The only way to understand what all those dancers feel thru Kareem’s music and dance is to simply experience it!

For more then 20 Years, Kareem Raïhani shares his music throughout Europe and beyond and mixes like no other different styles of dance music into a happening of body shaking rhythms, shamanic vibes, heart opening sounds, spiralling melodies and contagious grooves. His sets are containing many of his own productions and remixes. Being close to the heart and Mother Earth. Respecting ancient knowledge and conscious of modern technology.
Kareem’s Dj sets are setting dance floors on fire! He is always reaching for that moment when the trance kicks in and the dancer becomes the dance…

The music Yarun Dee plays is a fusion of electronic music mixed with shamanic, tribal and oriëntal sounds from around the planet. The feeling on the dance floor is spacious and grounding at the same time. Subtile and compelling melodies, strong and earthy beats. Rhythms that make your body want to dance, your mind to become silent and your spirit to expand.
In the past several years he has been a resident at the core of Conscious Clubbing at Odessa and Club Lite in Amsterdam. Where he played at a broad spectrum of conscious events like Ecstatic Dance, Tantric Dance, The Chocolate Club, Nataraj and Shine. He lately started his own conscious club night at Odessa called IXCACAO, a Cacao Ceremony and Dance Journey , every 3th saturday of the month.
Playing at Ecstatic Dances throughout The Netherlands, Europe and beyond. Right now he also is a resident at Ecstatic Dance Utrecht and Ecstatic Dance Odessa Amsterdam and almost every other larger Ecstatic Dance in NL.
“Ecstatic Dance is for me a celebration of life, of human existence in it’s full spectrum & full expression. From darkness to light, from sadness, fear and anger to happiness, playfulness and lightness to feelings of pure ecstacy. Dancing is one of the best ways to become free and expand or even trancend the mind. To go beyond the ‘regular’ perception of myself, the inner- and outer Universe. Dancing can generate to become free of thought, all mist disappears and a direct experience of reality remains.

Like a pirate crew the musicians of the ‘Capitán’ from Argentina travel the whole globe, spreading their self made genre ,Fanfarria Latina‘. This is an explosive mixture of Balkan Beat, Cumbia, Rock, Reggae, Ska and other colorful sounds. With this unique combination of stirring Latin American rhythms and rousing Balkan Styles, they inspire their delighted fans worldwide! But it’s not only about music, it’s the special awareness of life full of passion and dancing mania, celebrated on stage with plenty of fun and positive energy. Capitan Tifus was founded 2006 in Buenos Aires and bring their powerful melodies and beats to all continents, with lots of heavy acclaimed gigs in Europe, South America, Russia, China and Japan. On their forthcoming mammoth tour in summer 2016 through whole Europe, La Fanfarria del Capitán present their new album “La Giravida”!
Website: https://www.lafanfarriadelcapitan.com/ 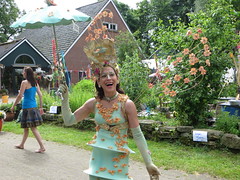